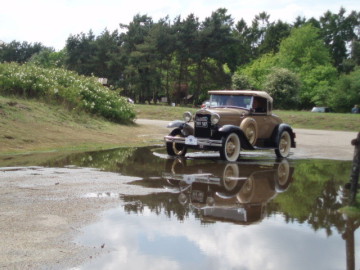 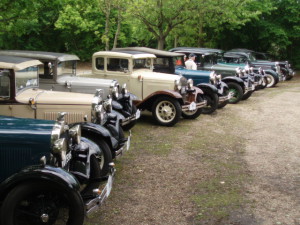 The Model ’A’ Club Annual tour in 2009 took place in Suffolk and despite the forecast of showers, it turned out to be largely ‘Sunny Suffolk’ for 25 Cars and their owners trundling around the county.

Centred on the historic town of Bury St Edmunds, with its Cathedral, Guildhall, famous brewery and olde world shopping, it afforded much to see in the immediate area for the visitors. There was the contrasting setting of the newly opened shopping centre where the ladies had an opportunity for a spell of Retail Therapy, away from their menfolk and tales of old car ‘anorakisms’.

'This years organisers had clearly spent a lot of time carefully planning 3 days of routes around the ‘sausage shaped’ county of Suffolk thus giving the entrants some very varied runs. The first day was around the town centre and including a tour around the Greene King brewery which has been on the site for over 200 years.

There was also the chance to visit the Cathedral and other interesting buildings dating from the middle ages and then following a quick lunch bite, Nigel sent us on a run around some villages in the immediate area including the chance to visit the reconstructed Anglo Saxon village at West Stow. We then passed through pretty places with quaint names like Hengrave, Flempton and Icklingham and even had a chance to stop at the end of the main runway at RAF Lakenheath hoping to see the take off of Military planes. Then it was back to the Ramada Hotel for an evening meal and more chat about the day’s events.

The following day took us around the villages to the south of Bury and of course, a stop in the wonderful town of Lavenham where Tudor Houses and shops create an almost olde worlde film set. Coffee shops and gift shops did well from our party and unbelievably for me, there came a chance to take a photograph of old cars parked on the street without any modern cars in sight making it look as though it was a picture taken back in the heyday of our beauties in the 1930’s.

Then we journeyed on to Flatford, where Suffolk and the neighbouring county of Essex, share the scenes so memorable of John Constable paintings. On a nice Spring day, when the sun shone and the ducks and swans had their young families swimming around on the river, it was a magic setting.

Our cars were lined up in a reserved parking area and we had many visitors looking at the models on view . Picnics over and it was off again this time into another pretty area of North Essex where further photo opportunities arose as we travelled through Mistley, the quaint village near the town of Manningtree, and its interesting setting alongside the River Stour. Then into Dedham, where the chance was taken to visit the church, the Weavers Houses, believed to be the oldest timber frame buildings in England. The local pub also did a good trade for those in need of refreshment before setting out on the journey back to Bury via Sudbury, the town of another famous English painter Thomas Gainsborough whose statue stands in the town centre. Sudbury presented a few problems to the cars as they negotiated the one way street system, but soon it was back to country lanes almost free of traffic and a nice steady journey back to base.

Sunday was another long trip this time over towards the East coast around the pretty town of Woodbridge. Our first stop however was at the WW2 airfield of Parham, where the old Control Tower houses a very interesting Museum.

Documents and other mementos of the war years are nicely displayed and we were there following a visit from some of the last remaining USA Air force officers who have over the years made many pilgrimages to their old base and established good relationships with the Suffolk locals who proudly maintain the remaining buildings. One interesting feature is the old underground shelter which has some very lifelike dummies occupying the beds as one enters!

The tour then went on to Framlingham which is a very quaint town with many old Tudor style buildings. Winding streets led the cars to the well preserved old castle where surprisingly, one can still climb up and walk around the old castle walls.

More photo opportunities and then it was back on the road and heading via the most direct route to Belcher Engineering who had arranged a nice display of their workshop facilities and enjoyed entertaining their visitors and answering their many questions on Model ‘A’ rebuilds.

Then back to the hotel and the Final Night Dinner where thanks were extended to the host couple Nigel and Katherine who had arranged a superb route around one of England’s underated regions. Many stayed in the bar late that night drinking and chatting with the friends they had made over the weekend and agreeing that they may well meet up again next year for the Club Tour in Durham.